A woman in that town who lived a sinful life learned that Jesus was eating at the Pharisee’s house, so she came there with an alabaster jar of perfume. As she stood behind him at his feet weeping, she began to wet his feet with her tears. Then she wiped them with her hair, kissed them and poured perfume on them.  ~ Luke 7:37-38

I was sitting in my room brushing my hair when I heard her open the door gently.

"Hey, where were you last night?" she asked.  "I could not find you in all of the usual places.”

“I was around,” I offered, I was still brushing, not looking up at her.

“And when I looked in your room, it was dark and you were sleeping already.  It was early.”

“Yes, I felt asleep early.  Best sleep I’ve had in a long time.”

“So then, you didn’t work last night.”  I finally looked at her.  Her hands on her hips, a worried look passed over her face, and then it was gone into a sneer.  “What on earth has gotten into you lately?”

“Maybe nothing on earth,” I said, mostly to myself.

“No really,” she sat next to me to look me in the eye.  I tried to keep my face blank, the traditional blank stare of women with my profession.  “What is going on?  Ever since you ran into that rabbi,” she said it as if to curse, “what is his name? Jesus? You have been moping around.  Get over it.”

“Yes, it has changed me,” I confessed, looking out of the window, remembering the day. “He was teaching in the crowds, I didn’t mean to stop because it was mid-day. But His voice was so compelling, and what He said was so amazing.”

“Ha! What worthwhile thing could ever come out of the mouth of a rabbi?”

“But it was more than that!  He saw me in the crowd and started moving towards me, looking right at me.”

“See, I told you men are all the same! Even rabbis!” she spit out.

“No, no, He was not like that!  He did not look at me with disgust or lust, as men usually do.  He wanted nothing from me, I could tell that immediately.  It was like He had a gift He was longing to give to me, and wanted nothing from me in return! He came closer and closer and then you would never believe what He did!” I could tell my eyes were growing larger and I could feel the blush creep across my face.

“What did He do?” Unwillingly, she had become caught up in the story.

“He came right up to me and put His hand on my arm, and looked straight into my eyes when He was concluding a part of His teaching.  He said, ‘Love your enemies, do good to them… Then your reward will be great, and you will be children of the Most High, because he is kind to the ungrateful and wicked.’”  I turned and looked right at her.  “Do you understand what He meant?”

She looked dumbfounded and shook her head.  “You mean the rabbi touched you? How can that be?  He must have known what you are.”

She laughed again.  “Yes, that would be you.  But what does that have to do with last night?”

I sighed.  This was the hard part to explain.  “I want to be that.  Clean.  I want to be clean.”  I pinned my hair on top of my head, wrapping my scarf around me.

I shook my head.  “I can’t believe that. I won’t believe that.” Looking round, I found it.  I pulled out the alabaster jar of perfume, tool of my trade, and placed it in my bag and stood up.

“Where are you going? It’s too early to start.”

“I am not starting.  I am finished.  I have a dinner party to go to.” I walked to the door and looked back at her.  “If you had been there, if you had seen Him, if He had touched you, then you would understand.”  She sat there and shook her head as I walked out the door into the early evening twilight. 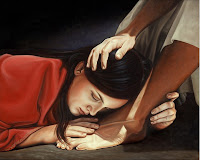 Hours later, I returned.  My eyes were still red from my tears.  My alabaster jar was empty, poured out.  My hair was pinned up again, but not nearly as neatly as when I left.  But I was smiling. I could not stop smiling. I saw her as I was coming in. She was applying the last touches of make up on her face, getting ready for the night.

She looked up at me.  “I heard,” she said.  “You have really lost your mind. Simon the Pharisee’s house?  I can’t believe they did not beat you.” She put down her make up and followed me into my room.  “Why?  Why did you do it?”

“I had to thank Him.”  I found a bag and picked through my clothes.  “You know what He said to me?”  I looked at her.  “He said, ‘Your sins are forgiven.’” I put some of the more modest items in the bag and made a pile of the others.

She shook her head.  “Don’t be ridiculous.  Men don’t forgive us.  They use us, they pay us, and sometimes they beat us. In the streets, they ignore us. They never forgive us.”

“This was no ordinary man.  They say, and I believe, He is Messiah.”

“Messiah would never forgive you!  He would condemn you!”

“That was what I thought.  But I was wrong.  Look, I am leaving.  His party has other women in it. I am going to join it, if they will have me. Here, take my things.”  I gestured to the pile of fancy clothing, jewels and make up that I was leaving behind.

She saw I was serious.  “No, these are all your best!”

“No, take them, I have no need for them now.” I turned and took both her arms and held them tight. “Better, leave them and come with me!  He forgave me, He will forgive you too!  Come, and we can both be clean!”

For a moment she looked at me and there was a glimmer in her eyes, hope beyond hope, but then it clouded over and she shook me off.  “You are crazy. Crazy!” Her voice rose. I took my bag and walked towards the door as it reached a shrill pitch.  “He will not keep you! The others will not allow you to come with them!  You are dirty, defiled, you will never be clean! You will be penniless! You will starve! No one will give you anything! You are crazy!”

I looked at her from the doorway.  “Maybe.  Maybe not.  But no matter what happens, I am clean now, and I cannot, I will not go back.  I trust Him.  In life or in death.  I trust Him.”

I heard her screaming as I walked away.  But I kept repeating His words. My faith had saved me.  And I went.  In peace.
Posted by Barb at 1:10 AM