Call Out to Jesus

He called out, “Jesus, Son of David, have mercy on me!”
Silvio passed away on Tuesday in the early morning. The hospital called us and said he was gone.
Silvio was the youngest of four brothers. I met him when he was a teen, his head full of wild black curls, long as it was the custom in those days. He seemed awkward and shy until he grabbed someone's attention, like my dad who was a patient listener, and then he would talk on and on.
As a boy, Silvio had an anxious heart and so he used repetition and he collected things, ordinary silly things like used cups and paper towels, to calm his heart. He grew more and more anxious until he had to quit high school and was never able to find a job he could handle. He spent his time at home, caring for his father, his mother, and the family pets. He fed stray cats and gave away things to neighbors who would stop by. He was a voracious reader and very smart but his quirky ways and shyness kept him isolated.
One of the things that gave Silvio comfort was attending mass. It was on a return walk home from church in 2011 that he had a seizure so intense that he was taken to the hospital for the first time. It was a brain tumor. The tumor was removed but Silvio was never able to return home again. His body healed but his mind was confused and his anxious heart made him angry. 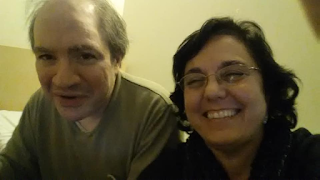 Years went by and because Silvio was in a care center, Al and I actually saw him more. On these visits, we would listen to his complaints, his anxiety, his confused thoughts. We would bring him items he asked for, like notebooks, pens, vitamin C and materials to read. We would joke with him and show him photos of his nieces and nephews. I would take his arm and walk with him through the hallways of the center that was his home.
And in his small room he would have a bible on his table and a few symbols of his faith. His TV was turned to the catholic channel, allowing him to attend mass from his room.
Silvio's mind no longer had a good grip on reality. But that did not stop him from calling out, reaching out to Jesus.
The brain tumor never fully went away. It was removed two more times. This week, when symptoms returned, the tumor was too massive and it won.
I have spent most of my adult life studying the Bible. It is important to me that I know Jesus deeply and understand His words to us accurately, and how He would want me to apply them to my life. I pursue this with passion and a desire to know truth.
But today as I read this passage of the blind man calling out to Jesus, I understand that all Jesus wants is for us to reach out to Him, to call out to Him for our comfort, for our healing, for His forgiveness. And when we turn to Him and call out to Him, He is delighted, He praises our faith, He heals us.
Those who led the way rebuked the blind man and told him to be quiet, but he shouted all the more, “Son of David, have mercy on me!” Jesus stopped and ordered the man to be brought to Him. When he came near, Jesus asked him, “What do you want Me to do for you?”
“Lord, I want to see,” he replied.
Jesus said to him, “Receive your sight; your faith has healed you.” Immediately he received his sight and followed Jesus, praising God. When all the people saw it, they also praised God. (Luke 18:38-43)
Tonight, Silvio is with Jesus. He is standing straight and tall. He is not anxious but at peace and in his right mind. He has his full head of wild black curls. I look forward to meeting him again there, hearing his goofy laugh, walking with him, holding his hand. His faith has healed him. So let us also praise God.
Posted by Barb at 5:07 AM

I am so sorry for your loss, but I love the Silvio is with Jesus. How great is that!?!? I love how you told the story of his life and his faith in the One who can bring him true peace and love and joy and heal him (and us) beyond our wildest dreams.

May God bless your soul my dear cousin Silvio 🙏