This is how Jesus the Messiah was born. His mother, Mary, was engaged to be married to Joseph. But before the marriage took place, while she was still a virgin, she became pregnant through the power of the Holy Spirit. Joseph, her fiancé, was a good man and did not want to disgrace her publicly, so he decided to break the engagement quietly. 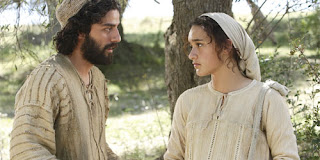 As he considered this, an angel of the Lord appeared to him in a dream. “Joseph, son of David,” the angel said, “do not be afraid to take Mary as your wife. For the child within her was conceived by the Holy Spirit. And she will have a son, and you are to name him Jesus, for he will save his people from their sins.”  ~ Matthew 1:18-21

I first heard this term, first thought wrong, in Philip Yancey's book, What Good Is God?  In his chapter entitled Why I Wish I Was an Alcoholic, Philip talks about an alcoholic in recovery who figures out that most first thoughts and impulses he has were wrong..."I need a drink---No you don't you know where that leads." Recovery for him was finding friends who taught him to have better second thoughts, and for him to stop to choose these better second thoughts.

That struck a chord with me.  How often my first thoughts are wrong!  Here I found in reading the Christmas story, that even for Joseph, his first thought, although it was one filled with mercy and integrity, was wrong.  It wasn't what God wanted.  God had a bigger thought.  A far better thought. Joseph "considered this" and the Lord was faithful to speak to him in a dream.

How often I want to think I have "arrived."  I have learned better and can go with my impulses, my first thoughts.  But no, over and over again I find my first thoughts are still wrong.  Even if they are not wrong, how much better to stop and consider and pray to God to ask if He has a better, bigger thought.  Yancey points out that alcoholics have a step up on us because they understand they are only one drink away from falling.  So they know they must be diligent, stay close to God and to their community, where they find continued mercy for failures and strength to carry on.  And tough love when they need it.

I need this too.  I need to take every thought captive, every time. I need stop and ask God for a second thought, a better thought.  His thoughts, that are always greater than my thoughts.

Father help me never think of myself "too recovered" to consider my first thought is wrong!

We demolish arguments and every pretension that sets itself up against the knowledge of God, and we take captive every thought to make it obedient to Christ. ~ 2 Corinthians 10:5
Posted by Barb at 11:37 PM