Captivated by the movie scene playing in blazing color on the 72-inch TV, I stood transfixed as I waited for my daughter to complete her Best Buy purchase. It was the Terminator Geneisys bridge scene where Arnold chases the fleeing school bus, his determined face showing through the circle of shattered windshield glass.

As the scene progresses, the evil character damages the bus’ mechanisms causing it to flip in mid-air, careening wildly and finally stopped, hanging off the side of the Gold Gate Bridge. The good gal and guy team are still in the bus, dazed but unharmed, as is the bad guy and a chase ensues inside the dangling bus. Arnold arrives at the bus just in time to reach out his strong arm to the gal, who in turn grabs the arm of the good guy as he reaches out to her. The bus breaks free and falls into the water below with the bad guy in it just as Arnold pulls the gal and guy to safety.

And then the movie switched to another scene in another movie and I found myself back in the Best Buy TV sales section.

For several days the scenes flashed repeatedly through my mind. Arnold, the hero who they tried to kill over and over but they could not. How he relentlessly chased them and then rescued them with his strong arm. So much like our Jesus! 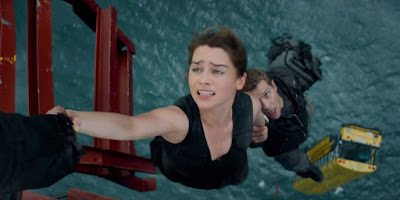 Jesus came as a babe in a manger, tender and mild. He looked like a toddler to the wise men and when He grew He looked like a mere man to the townspeople of Nazareth. But He is not. Jesus is greater than even Arnold in all his cinematic special effects. They tried to kill Jesus but they could not. He too emerged unharmed, not from a damaged vehicle but from the grave. Jesus’ saving is greater too, saving not only our lives of flesh but our eternal lives as well.

Jesus chases after us. He reaches out His mighty arm. He will save you from whatever bus you are hanging from. Grab His hand today.


Give thanks to the Lord of lords…
to Him who alone does great wonders..
with a mighty hand and outstretched arm…
His love endures forever.
(Psalm 136:3, 4, 12)